New ForgeFPGA™ Family Is Supported by Free, Easy-to-Use Software with No License Fees 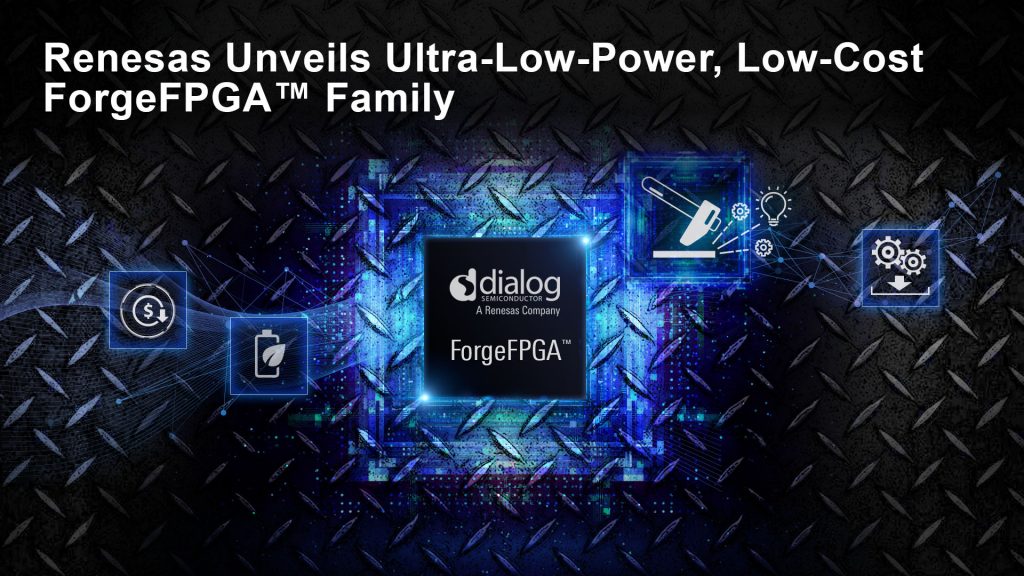 November 17, 2021  TOKYO, Japan ― Renesas Electronics Corporation (TSE:6723), a premier supplier of advanced semiconductor solutions, today announced that it is entering the Field-Programmable Gate Array (FPGA) market with a new line of very low-cost, very low-power devices. The ForgeFPGA™ Family will address the underserved market need for relatively small amounts of programmable logic that can be quickly and efficiently designed into cost-sensitive applications.

The ForgeFPGA devices will provide dramatic cost savings versus other alternatives, including non-FPGA designs. By providing a high level of integration, they reduce overall board and system costs. Their projected price in volume of well under US$ 0.50, opens up applications that previously couldn’t use FPGAs due to cost constraints, including high-volume consumer and IoT applications.

The ForgeFPGA Family will serve applications that require less than 5,000 gates of logic, with initial device sizes of 1K and 2K Look Up Tables (LUTs). Standby power of less than 20 microamps is projected for the first devices, about half the power of competing devices. Users will be able to download the development software at no cost and with no license fees. The software offers two development modes to accommodate both new and experienced FPGA developers: a “macrocell mode” that uses a schematic capture-based development flow, and an “HDL” mode that provides a familiar Verilog environment for FPGA veterans.

The ForgeFPGA Family development team is the same group that introduced the highly successful GreenPAK™ programmable mixed-signal devices at Silego Technology, which came into the Renesas portfolio as part of the recently completed Dialog Semiconductor acquisition. The new FPGAs will use the same business model and infrastructure as the GreenPAK line: free, easy-to-use software with no license fees, and available worldwide applications support. This model has proved highly successful, with billions of GreenPAK devices already shipped amid continued growth.

“It’s exciting to see an established semiconductor vendor like Renesas tackling a long-ignored portion of the FPGA market: small, low-cost FPGAs that sip microwatts in standby mode,” said Steve Leibson, Principal Analyst, TIRIAS Research. “Having scooped up programmable device maker Silego with its acquisition of Dialog earlier this year, Renesas seems determined to repeat Silego’s previous success with its ultra-low-end GreenPAK line of programmable mixed-signal devices and super-simple design tools, this time in a low-end FPGA line that will appeal to many companies who just need a bit of programmable logic – a thousand gates or so – to get the job done in myriad products including billions of embedded sensors and IoT devices.”

“We are eager to extend our leadership in the small, low-cost, programmable market into FPGAs,” said Davin Lee, Vice President of the Mixed-Signal Division in Renesas’ IoT and Infrastructure Business Unit. “We know from experience and from direct conversations that these devices will appeal to companies large and small in numerous markets around the world.”

Key Features of the ForgeFPGA Family

Renesas is preparing to offer multiple Winning Combinations featuring the new ForgeFPGA devices with complementary MCU, analog, power and timing devices. Winning Combinations provide an easy to use architecture, simplifying the design process and significantly reducing design risk for customers in a wide variety of applications.

ForgeFPGA engineering samples are available now, along with beta design software and a prototype development kit. The first ForgeFPGA device, the 1K LUT offering, is expected to be available in production quantities in Q2 2022. Interested designers can visit https://www.dialog-semiconductor.com/products/greenpak/low-power-low-cost-forgefpga to find out more.